After three months of living here on the Caribbean coast, I felt it was time to take a break from the relaxed pace and eternal sunshine of Barranquilla and head for the big city. Not quite ready for the cold climate and 8 million strong population of the capital Bogotá, I opted for a 5 day trip to Medellín. 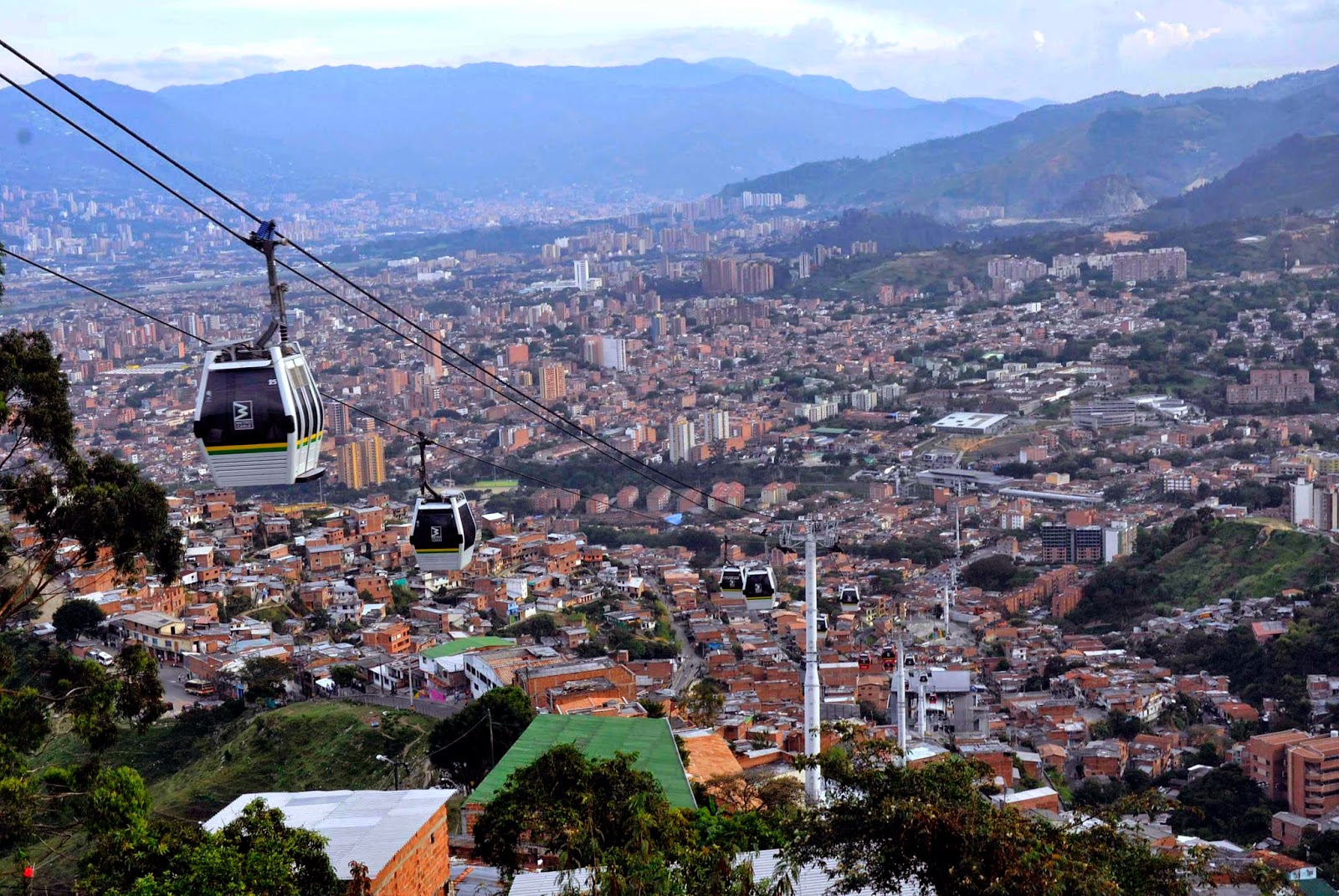 Medellín is a city which has seen phenomenal changes in the past 10 years. Once the home and headquarters of the infamous drug baron Pablo Escobar, it has transformed itself from what was at one point the world’s most dangerous city into a thoroughly modern, innovative and prosperous metropolis. The teleferic cable cars seen in the picture above are just one example of how the city has made huge changes in order to help its citizens, allowing people from poorer neighborhoods in the hills to access the city with ease.

All fantastic news, and it gets even better, as this wonderful city is also home to some absolutely cracking comida. On my first day of my trip I met up with my very own paisa tour-guide, Ana Maria, who I met when travelling in Peru. She took me to a place called Hacienda in the city centre, which was decorated like a traditional Colombian ranch estate. Being in a restaurant that served nothing but paisa food, with what was supposedly the best bandeja paisa in the city, my order was a no-brainer. Avocado, fried pork, ground beef, rice, black sausage, chorizo, an arepa, fried plantain , kidney beans and a fried egg make up this much loved and absolutely mammoth dish, the bandeja paisa. It originated from when farmers in the Antioquean hills where looking for a filling, high-calorie meal to give them energy for the whole day. Now recognized as the countries national dish, the bandeja paisa is a Colombian classic and completely delicious…even if after half-way through it gets a bit nauseating!

Rolling out of lunch, I felt full, but very excited at what other meals Medellín was about to offer up. And turns out, it wasn’t all deep fried pork rind either. In fact, quite the opposite. 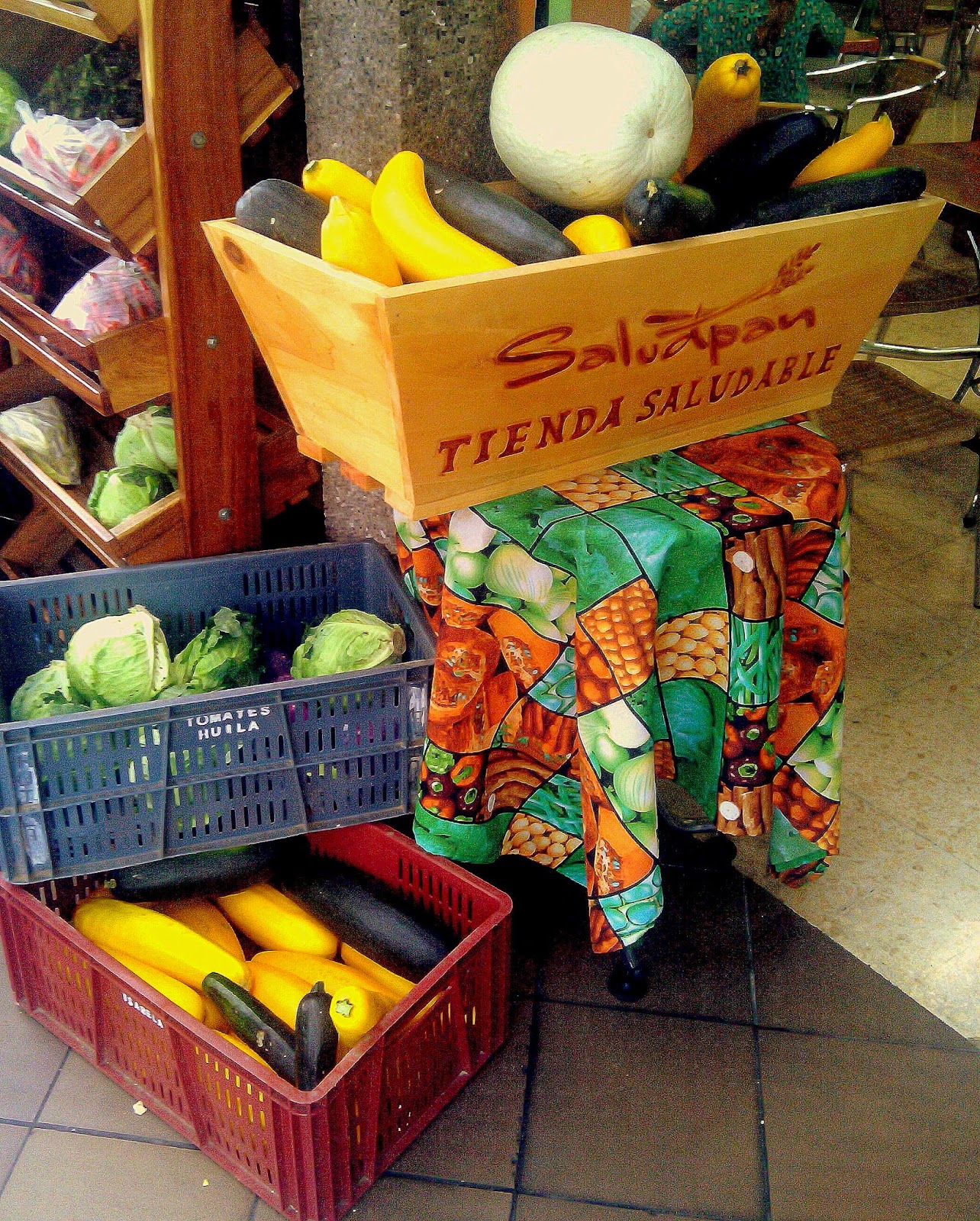 Saludpan is a health-lovers paradise. Located in the trendy neighbourhood of Laureles, it serves fresh, healthy dishes, with many raw specialties, gluten-free and vegan options. A far cry from the fried empanadas and cheesy arepas we had been munching on, it was a nice opportunity to nourish our slightly over-partied and under rested bodies. And believe it or not, bandeja paisa was even on the menu here too!

This veggie version of the normally meat-filled national dish included brown rice, soya beef and sausages, with vegetables instead of kidney beans and it was sin the fried egg. My verdict? If you eat meat, I’d stick to the original, but for a veggie this is a great way to sample a slight variation on one of the countries best-loved dishes. And even for a carnivore like myself, it’s probably best to keep the consumption of fried pork rind down to just once or twice week. After all that healthy vegetarian fare, it was back in search of some typical Colombian comida. On a whim, a friend and I decided to head out of the city and into Sabaneta, a smaller town located in the north of the city, a metro and bus ride away from the town centre.

A very humble and local neighbourhood, Sabaneta was a lovely change from the hussle and bussle of the city centre and the fun yet over-priced and gringo-fied fancier barrios in the south.We headed to El pelegrino for a quick snack, but soon realised it was probably rude not to opt for a proper meal of some sorts. Not the full out bandeja paisa, we went for what I consider the best parts – meat, meat, and more meat. 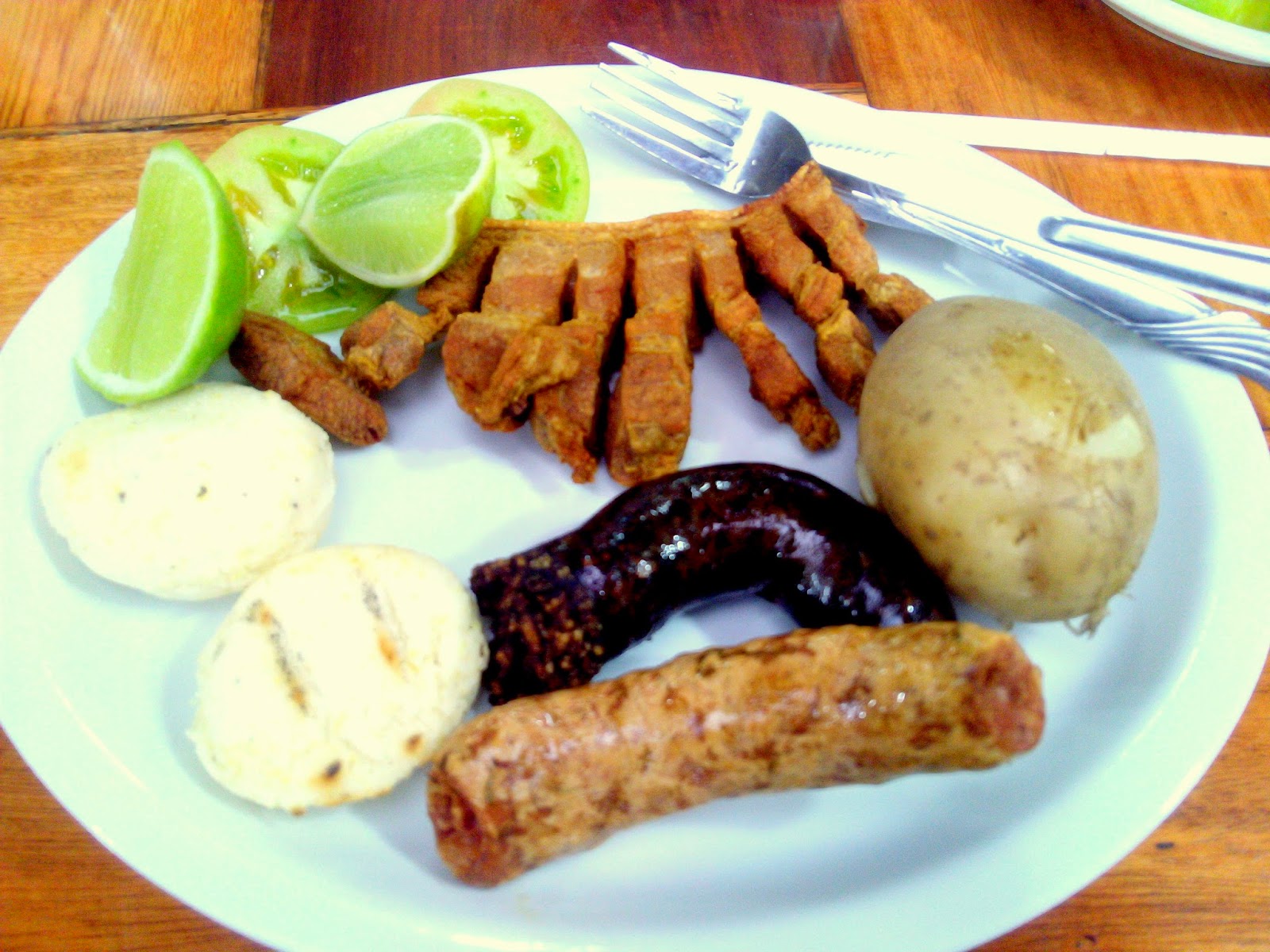 After this quick bite, which consisted of some of the best blood sausage I’ve had, some room was left for dessert. 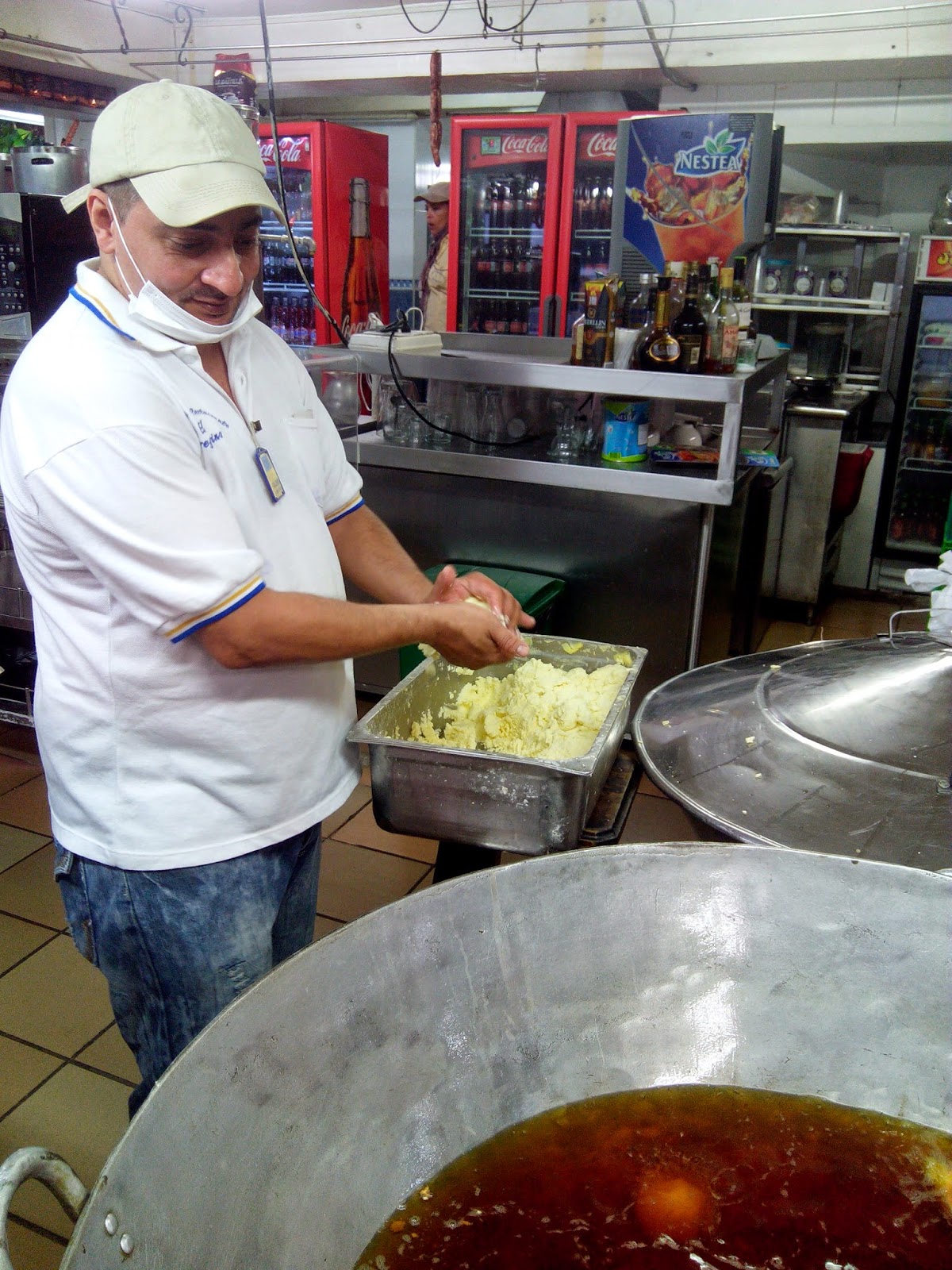 Buñuelos are round balls of a simple dough with the addition of costeño cheese, deep fried and sometimes topped with sugar. Freshly cooked, these balls actually weight a ton! Torn apart and dipped into hot chocolate or coffee, these are often eaten for breakfast or as an afternoon snack.

Leaving Sabaneta, it was back into Medellin. But not for long, as being the eager tourists we were, we wanted to get the most of our brief time in the city. Our next trip was to Guatapé, a picturesque village 2 hours outside of Medellin. Guatapé is famous for its Piedra del Peñol, an enormous rock can be scaled by any tourist who dares. The piedra actually has stone steps, making the ascent far more climber friendly…however there are 571 of them.  It goes without saying that the reward for such a steep climb is a wonderful lunch. We searched around town for any place that smelled good, looked full, and would refuel our worn out selves after our climb. La Fogata was the place. Translating as ‘The bonfire’ in English, La Fogota serves up basic, no-frills food at its best, in a scenic location alongside service with a smile. Guatapé is located right next to the river, meaning almost all the restaurants in the town offer up fresh fish. Sat down at La Fogota, I found myself torn between what would inevitably be a wonderful bandeja paisa and some tasty fresh fish. Not to worry, as my ordering anxieties were soothed by the compromise in the form of a bandeja trucha. 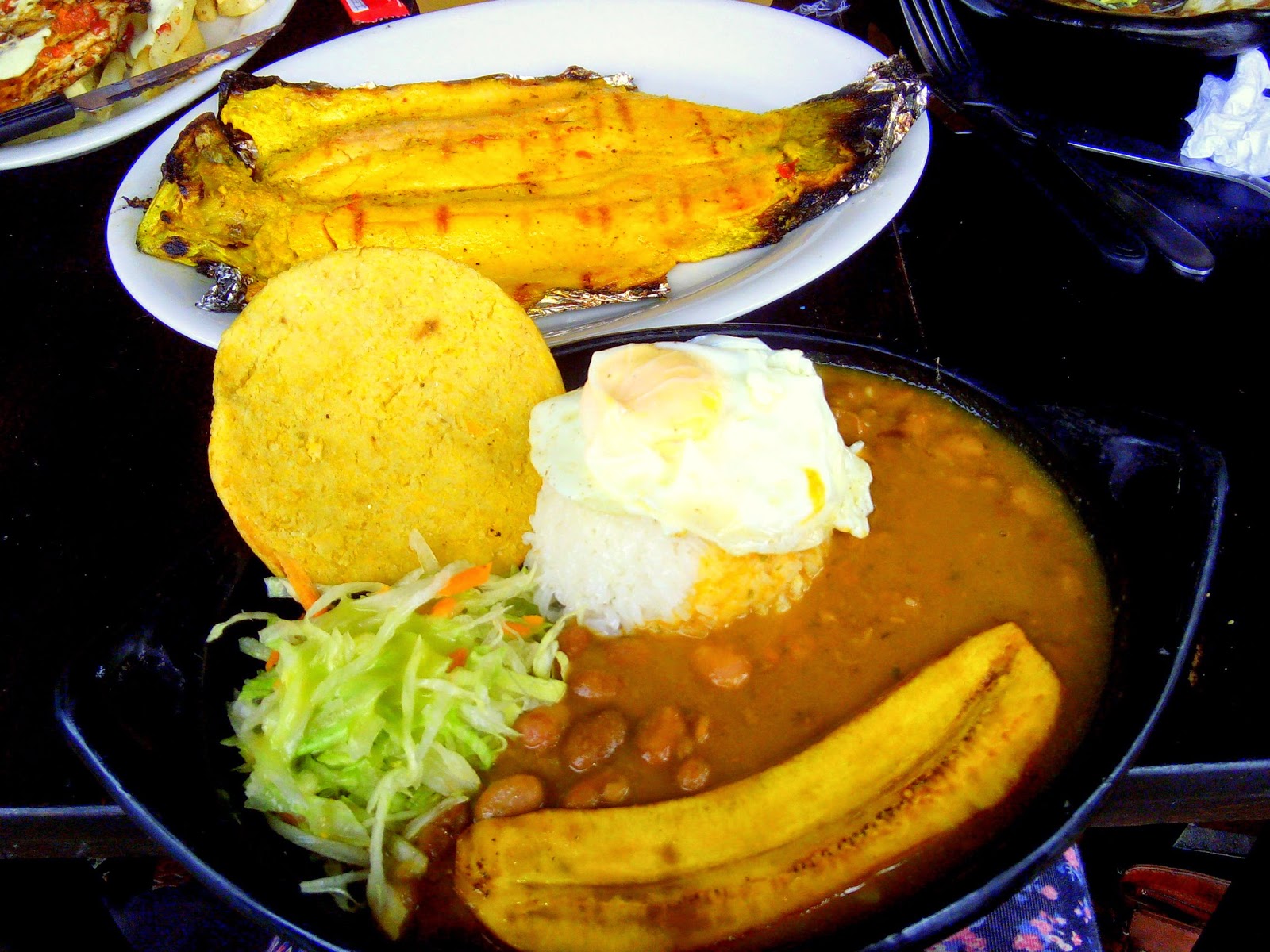 In this dish the three meats that normally come in a bandeja paisa were replaced by a wonderful barbecued trout. The fish had been marinated in a tomato-paprika sauce and really was delicious and everything else that came with it was spot on too. Of course, some people opted for the classic bandeja paisa and I must say it did look good. 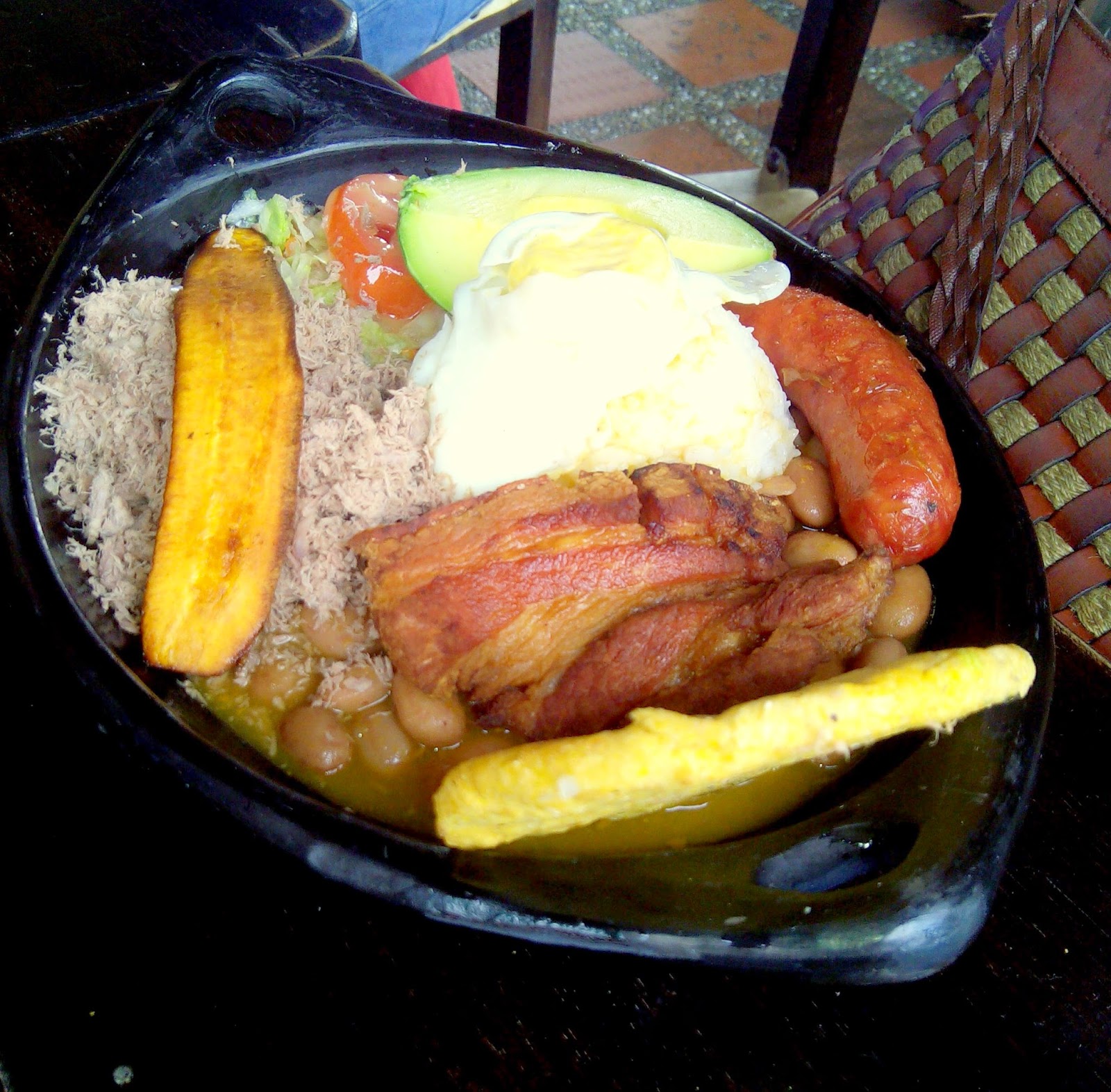 Overall, Medellín was an absolutely great trip. The city itself is fun, modern, and having changed so much in the past 10 years it is a fascinating place to visit. The friendliness of the people and character of the city give it a brilliant vibe and definitely left me wanting to return. And the food? Any town that can claim a dish consisting of three different meats as their own gets a thumbs up from me!

« Plantain, how do I cook thee? Let me count the ways…
Offally good stuff – Stomach and salsa in Barranquilla »