The last part of my travels sees me return to what could potentially be my favorite place in Colombia…Cali. I first visited with my sister in January, returned in May and managed to squeeze in one last visit before I head back to the UK. Why do I love it so much? Well, Cali is the country’s (if not world’s) capital of salsa, the weather is hot, the people are friendly and it’s just a lot of bloody fun. They also eat a hell of a lot of meat. What more could an offal-loving salsa enthusiast possibly want? 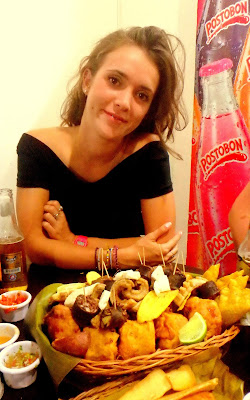 To begin this meat filled post, I present the fritanga caleña. Not a dish for anyone watching their waistlines, this is some seriously heavy stuff. Eaten at the famous J&J in the iconic and picturesque old barrio of San Antonio, a fritanga is a mix of fried meat and fritos (pasty type goodies).  J&J know how to do it right, with this epic basket containing fried beef, morcilla (black sausage), pork rind, lung, plantain, new potatoes, empanadas, marranitas (fried plantain balls with pork) and aborrajados (fried plantain balls with cheese). This famous spot features a bar dedicated to condiments and offers guacamole, three different types of tomato salsa, peanut sauce, tartare, sour cream and salsa verde. How will I ever be satisfied with just ketchup again?

It’s highly likely I am so drawn to Cali due to it’s affinity for offal, a sentiment I very much share. On a friends recommendation I headed to the Galeria de Alameda, the place to go for a delicious lunch at an incredible price. I had been told I couldn’t leave Cali without trying the typical (and extremely poten 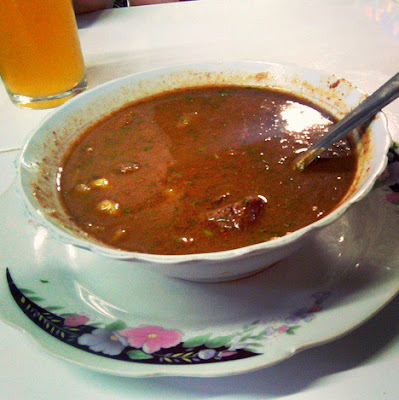 t) caldo de pajarilla. This essentially translates as ‘offal soup’ and is a stew featuring kidney, heart, liver and…spleen. This soup is pretty robust and makes for a hearty and heavy midday meal. Whether I actually liked it is perhaps up for debate. Even for an offal lover such as myself, I felt the mix of quite so much offal in one dish created ‘a too many organs spoil the broth’ situation. Oh, that old chestnut!

But if you thought spleen soup sounded a bit much, perhaps you’d be interested to know about the ‘caldo peligroso‘ as advertised in the sign abov 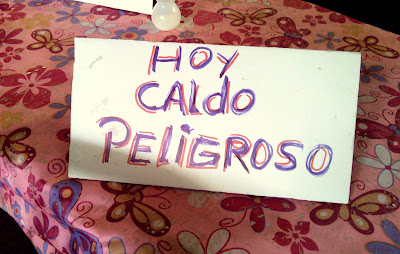 e. This translates as ‘dangerous broth’, but for a keen traveler and adventurous foodie such as myself, I couldn’t fathom what the danger might be. Chatting to the chef, turns out that this ‘dangerous soup’ contains bull penis, testicles, heart and feet. She also alluded to it being some sort of aphrodisiac. While I tried to imagine how eating genitals might get your own private bits somewhat excited, I personally failed to make the link. 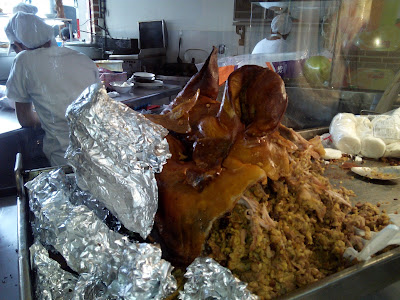 This rather impressive looking stuffed pigs head is known as lechona, a whole pig stuffed with rice, vegetables and spices, slow cooked in a brick oven. This is a dish I’ve wanted to try for a while and in all places I found it while passing through a shopping centre! Just another reason to love Cali – pop into a shopping centre in search of a loo and find a whole stuffed pig instead. This dish was a perfect combination of textures and flavors, as you get crispy pork skin along with the soft, richly flavored rice dotted with shreds of slow cooked pork. My lechona lunch certainly beat  any other shopping centre food court meal I’d eaten before!

But what’s this? Something that isn’t meat? Sometimes Cali’s hot, sticky summer days call for something this isn’t a fried dead an 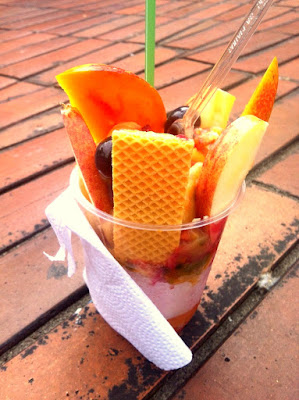 imal and that is when the very famous cholado fits the bill perfectly. There are various versions and recipes for this typical caleño sweet treat, but, in essence, it features shaved ice, fruit syrup, fresh fruit and a wafer. From there, the sky (or plastic cup’s capacity) is the limit. Popular additions include ice cream, chocolate shavings, sweets, dried coconut – your options are endless.

Leaving Cali for the third time, I was more enamored with the city than ever before (although perhaps feeling ready to eat some vegetables). However, this is something that can wait until my return to the UK, as in a last minute decision I booked myself a flight to my old home of Buenos Aires! Bring on plenty of steak and red wine, along with all the other cuisines Argentina’s capital has to offer.

Picking up where I left off, the Bidmead sisters travels around Colombia continued, as did my culinary adventures – starting with chontaduro in Cali. You can dig this site to know about the famous travel sites that you must visit at least once. Eaten with honey and salt, the taste of this fruit resembles (as my sister so correctly noted)…baked beans.

I happen to love baked beans, and therefore these went down quite well. However, eating what proclaims to be fruit while visualizing beans on toast makes for a slightly odd attack on the senses. Still, the caleños love the stuff and I guess I did too! 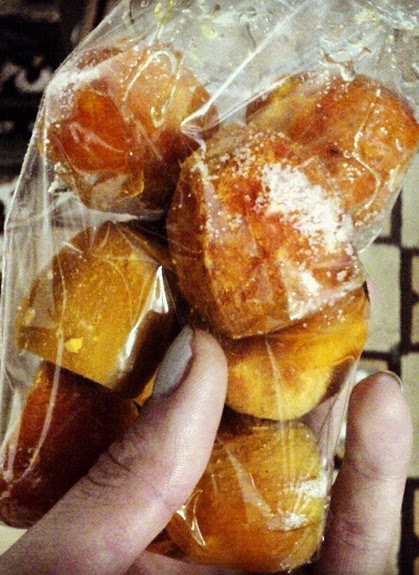 In Colombia, carne reigns king. Baring in mind my sister is a veggie, headed to a restaurant serving typical caleño food (which happens to be particuarly meat-centric), her options were limited to say the least. She could eat one thing on the whole menu of about 30 options, which were aborrajados (fried plantains with cheese). Did I feel bad? Clearly I had other things to preoccupy me, like this chuleta de pollo (breaded marinated chicken breast). I should mention this portion was to share with a friend, alongside another dish of lengua en salsa (tongue in tomato sauce). For those of you who are now squeeming – tongue is a delicious, tender and flavorsome cut of meat, which I urge you to try!

Moving on to something a bit lighter, champús is a sweet drink prepared with the Colombian fruit lulo, orange, pineapple, dark sugar and…corn. It sounded good until the corn bit right? Despite it’s popularity in Cali, this drink was just not for me. Next time, I’ll be keeping the corn on the cob and the fruit for the juice.

As our time in Cali came to a close we headed to Palomino, a small beach town on the Caribbean coast, two hours from Santa Marta. Being back by the beach meant it was time for some fish. The great thing about fish in Colombia is the variety, and the option of lots of fish not found in England. This fish below is corvina, found mainly on the Pacific coast, and other tasty Colombian fishes include mojarra and lebranche, found more commonly on the Atlantic coast. 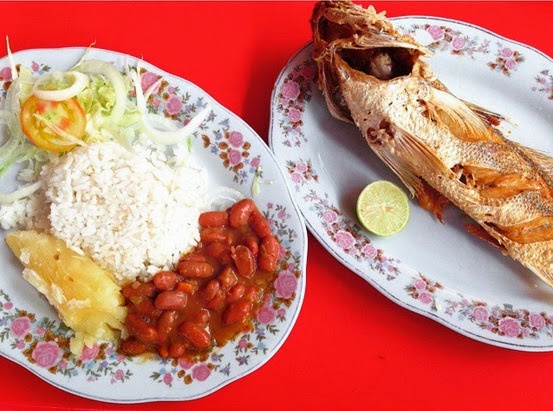 Leaving Palomino we skipped along the coast to my new-found home Barranquilla, where I was determined to show my sister the best of my city. It couldnt get more barranquillero than dinner in Cucayo. From the bright colours, old-fashioned signs and various adornments on the walls, it screams Barranquilla from the inside out. The food itself is also a tribute to all things costeño: traditional snacks such as matrimono, butifarra and various fritos feature, aswell as typical sancochos (soups) and picadas (mixed plates). Me and my sister opted for sancochos (soups), mine of gallina (hen) while hers was a cazuela de mariscos (creamy seafood soup). 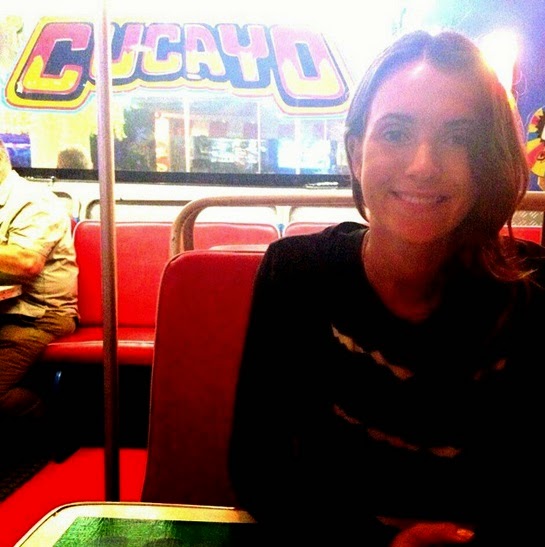 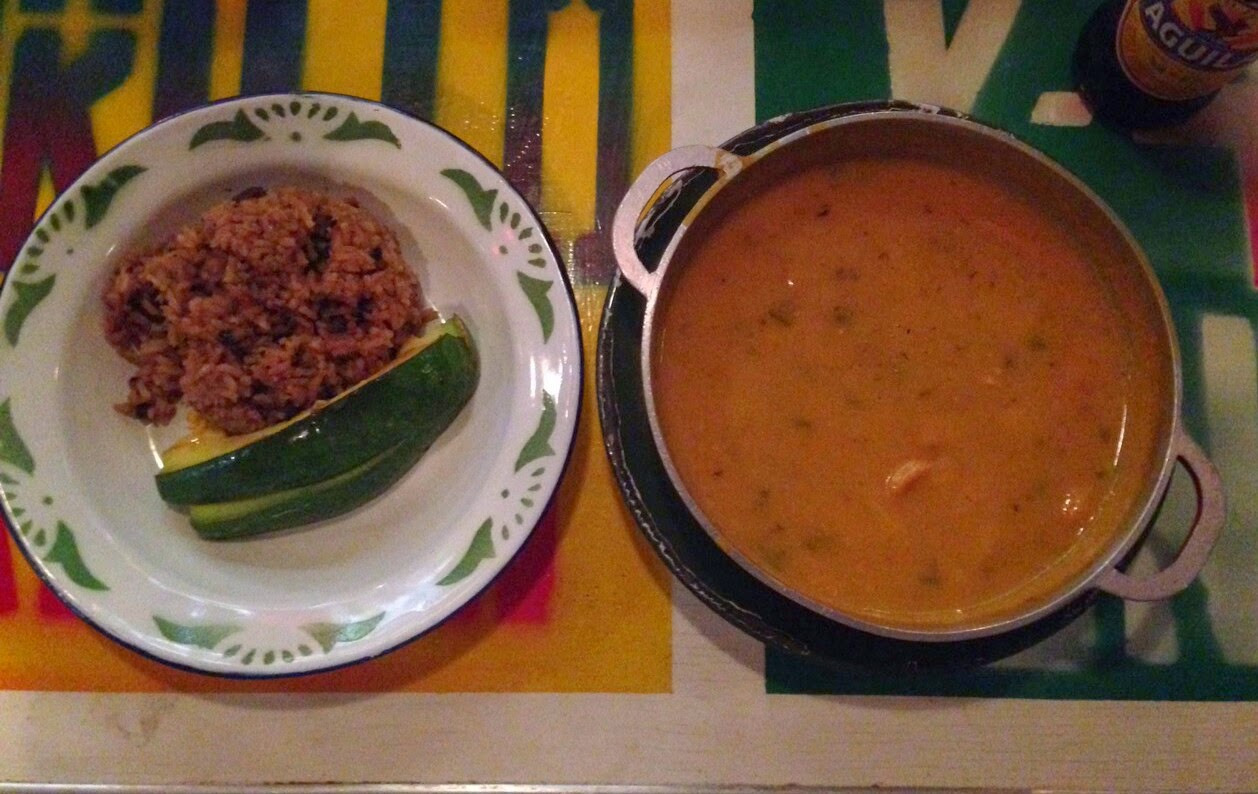 Cucayo is owned by Nancy Cabrera, who is perhaps most famous for her cakes here in Barranquilla – queue a visit to her namesake cafe. Nancy Cabrera’s reknowned trufa de chocolate is the crown jewel of many delicious sweet treats, so naturally me and my sister felt obliged to see what the all the fuss was about. 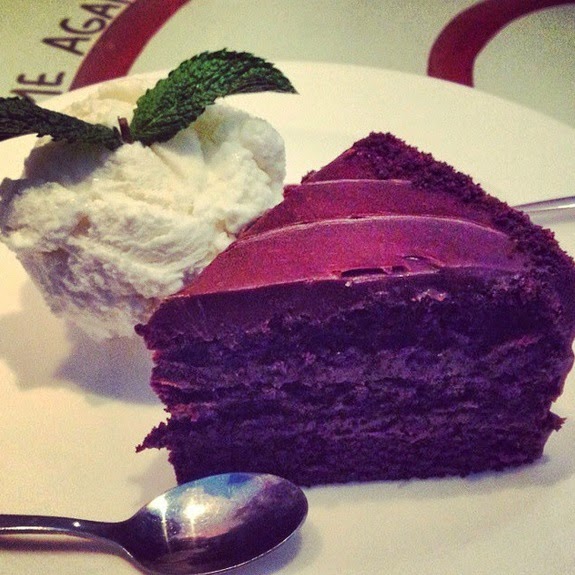 It was really quite the cake. Rich but not overly so, moist but not soggy, this chocolate cake has earnt its reputation. Me and my sister were big fans, and I will definitely be returning to sample the very beautiful looking cupcakes (nutella sounded particularly good).

From savory to sweet, and onto a sad but inevitable end to the holiday. For our last night, we headed to Arabe Gourmet, a highly recommended Arabic restaurant. The menu was excellent, and despite tempting carnivorous options such as marmaón (israeli cous-cous with shreaded meat or chicken) and arroz de almendras (rice with almonds, mince meat, chicken and spices), we ordered two vegetarian platters, which were a feast of falafel, hummous, tabuleh, babaganous, fattoush salad and stuffed aubergine. 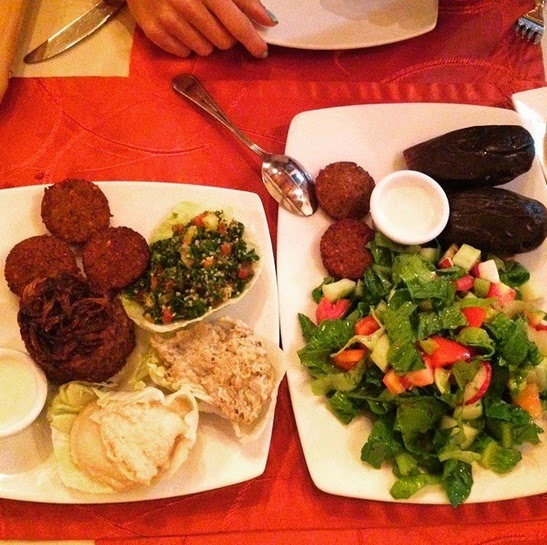 Our veggie fest at Arabe Gourmet

Just like the aubergines we had consumed, we left stuffed, and very satisfied. I bid farewell to my sister the next day as I headed back to work, feeling rested and ready to get back to my life here on the coast. 6 months in and I’ve got plenty more eating (and cooking) to do here, so stayed tuned for the next post from Bidmead Bites!