I write this post to you from Barranquilla, Colombia, otherwise know as my new home while I work over here as an English language teacher. Situated on the Caribbean coast, Barranquilla is known for its roaring carnival in February, which is Latin America’s second largest after Rio. Other than that, despite it being Colombia’s fourth busiest city, Barranquilla isn’t that highly rated as a must-see attraction in the country as a whole. While it might lack the metropolitan vibe that Medellín has become renowned for, or the sheer size of Bogotá, its kinda got its own thing going on. People from the coast, aptly named costeños, are happy, smiley, friendly people, and since I arrived just over three weeks ago I’ve received nothing but kindness from these great Barranquilleros. And it’s not just kindness I’ve received, because oh boy…do these people know how to eat!

Before coming to Colombia, I’d heard mixed reviews in regards to the cuisine. While some people told me it was wonderful, I’d also received a fair few lukewarm to negative opinions of the food. What could I expect? As someone who wholeheartedly embraces all new cuisines, intestines and all (quite literally), I felt ready to sample the comida of Colombia!

Colombia is particularly interesting in its cuisine, as what is available depends so much on the region you find yourself in. Caught up in Columbia’s chilly capital Bogotá, you’re likely to find many places selling ajiaco, a warming chicken soup with no less than 3 types of potato, capers and cream. Land into Medellín, located in the Antioquia region, and you’ll find bandeja pisa on the menu. Not a dish to be taken lightly, it consists of (prepare yourself) – beans, rice, shredded beef, pork belly, chorizo, fried egg, plantain, avocado…not something to be approached with anything less than a roaring hambre.

But what’s everyone comiendo aqui en la costa? An obvious start is fish. Fresh and plentiful here by the sea, it is served fried, accompanied with arroz de coco (coconut rice) and patacones, which are fried plantain rounds. The saltiness of the fish, accompanied by the sweetness of the rice and plantain is an absolute delight – a must-try dish for anyone around this part of the country. I was lucky enough to experience it home-cooked by a woman living in Puerto Colombia, a port town just north of Barranquilla, and it is something I will be having again very soon! 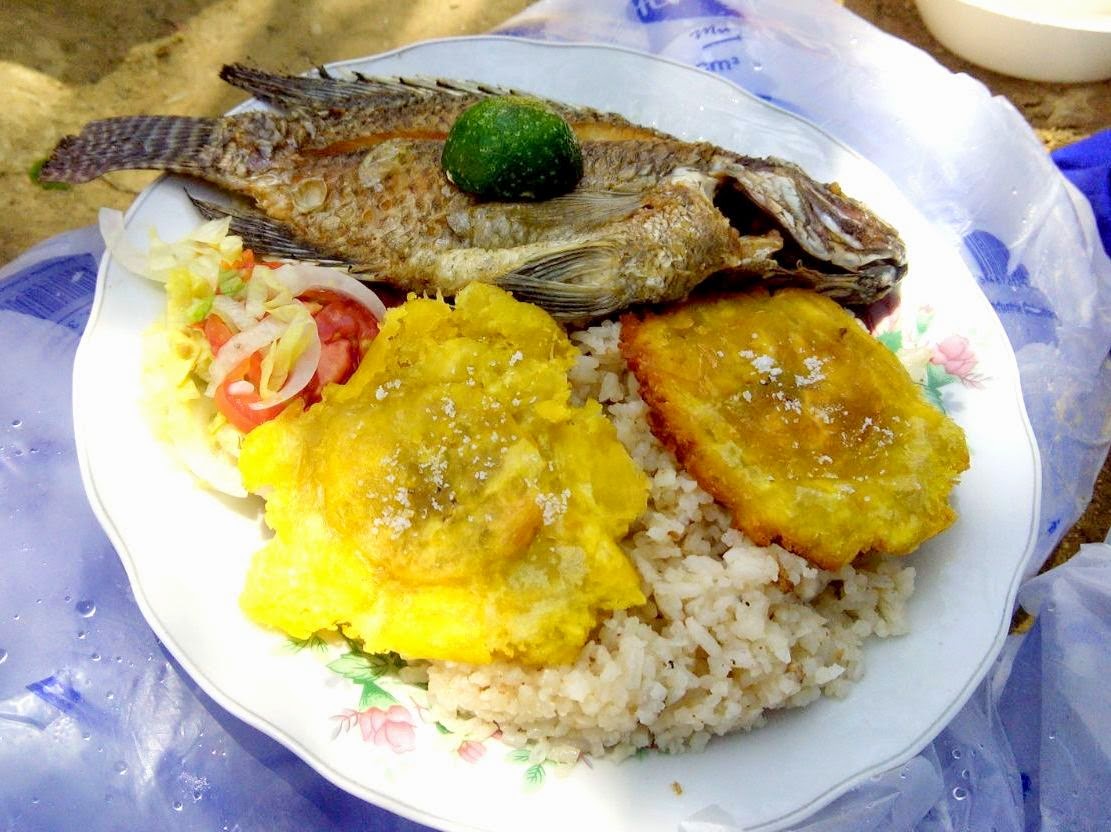 Breakfast here in Colombia is fairly different to in the UK. Again it depends massively on whereabouts in the country you are, but so far fried chicken, pork belly, rice, plantain and soup (to name just a few things) have all managed to make their way onto my breakfast plate. I was lucky enough to have been provided with buffet breakfasts during work training in Bogotá and Barranquilla when I first arrived, which gave me a great chance to sample many of Colombia’s desayuno delights. This plate above contains some very typical breakfast items. Wrapped in a banana leaf, a hallaca is a yucca based dough mixed chicken or pork, onions and raisins. The big round crispy item is an arepa con huevo – a cornmeal based patty, filled with an egg inside. Below the arepa is the half moon shaped empanada, a snack found across South America. Think of a pasty, Latin American style. The circular thing to the right of that is bollo, which can be made from yucca, cornmeal or fresh corn (mazorca). While this second plate above might look like a filling lunch or dinner to most readers, I’ll let you know this was a yet another breakfast, with the classic caldito (soup) on the side – apparently it helps a hangover better than any painkiller! Again we have empanadas and bollo, a skewer of chorizo, some ham, pan de bono (cheese rolls), and calentado, which is a fantastic mixture of rice, beans, shredded meat and plantain. All accompanied by fresh watermelon juice and cafe con leche. If you thought a full English breakfast was good, think again, because the Colombians here seem to have done one better!

Moving onto dinner, there are some great restaurants here in Barranquilla. Given that it is a port town, Barranquilla has received a wide array of immigrants into the city over the past 200 years, which has resulted in many foreign foods merging with the traditional Colombian fare. A particularly middle-eastern influx into the city can be noted in the large amount of Arabic parillas (grills). For a girl who lived in the bountiful land of beef that is Argentina, this is obviously music to my ears. Mixed meat grill and a mixed mezze at Zahle

Eating at Zahle, a highly recommended and great-value middle-eastern restaurant in the north of the city, I shared a parrillada completa. It came with various cuts of beef, chicken and chorizo, accompanied by yucca fries, a baked potato and suero (sour cream). Behind it is a mixed mezze, with stuffed aubergines and cabbage leaves, chicken rice and a tabbouleh salad.

This is but a mere peek into my first tastes of Colombian food, and every day I am trying new things, asking almost everyone I encounter what there is still to try, what they recommend, and if I can come and cook with their grandmas (really. I’ve had two invites so far!). So please stay tuned, and join me as I journey around this beautiful country, filled with wonderful people and absolutely delicious food.