The New York City Highline is a 1.45-mile-long park built in Manhattan along a disused New York Central Railroad. The Highline runs through some very cool parts of Manhattan, such as the Meatpacking district, famous for its nightlife, and also Chelsea, home to a lot of the cities art galleries. Getting off the Highline in Chelsea we sought out Chelsea Market , a huge indoor food hall with more than thirty-five stalls, with cuisines and dishes from all over the globe. 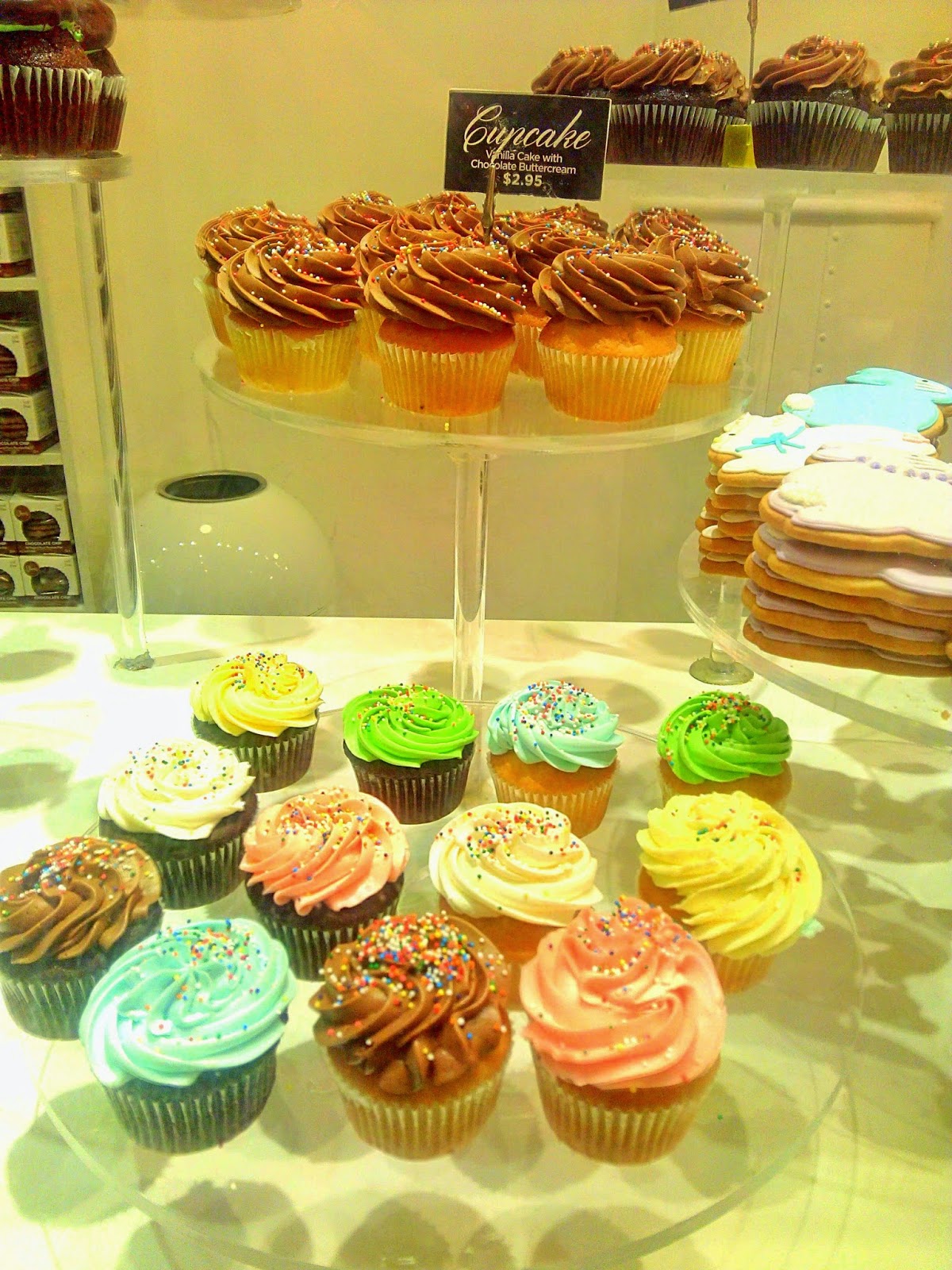 Cupcakes and oysters at Chelsea market 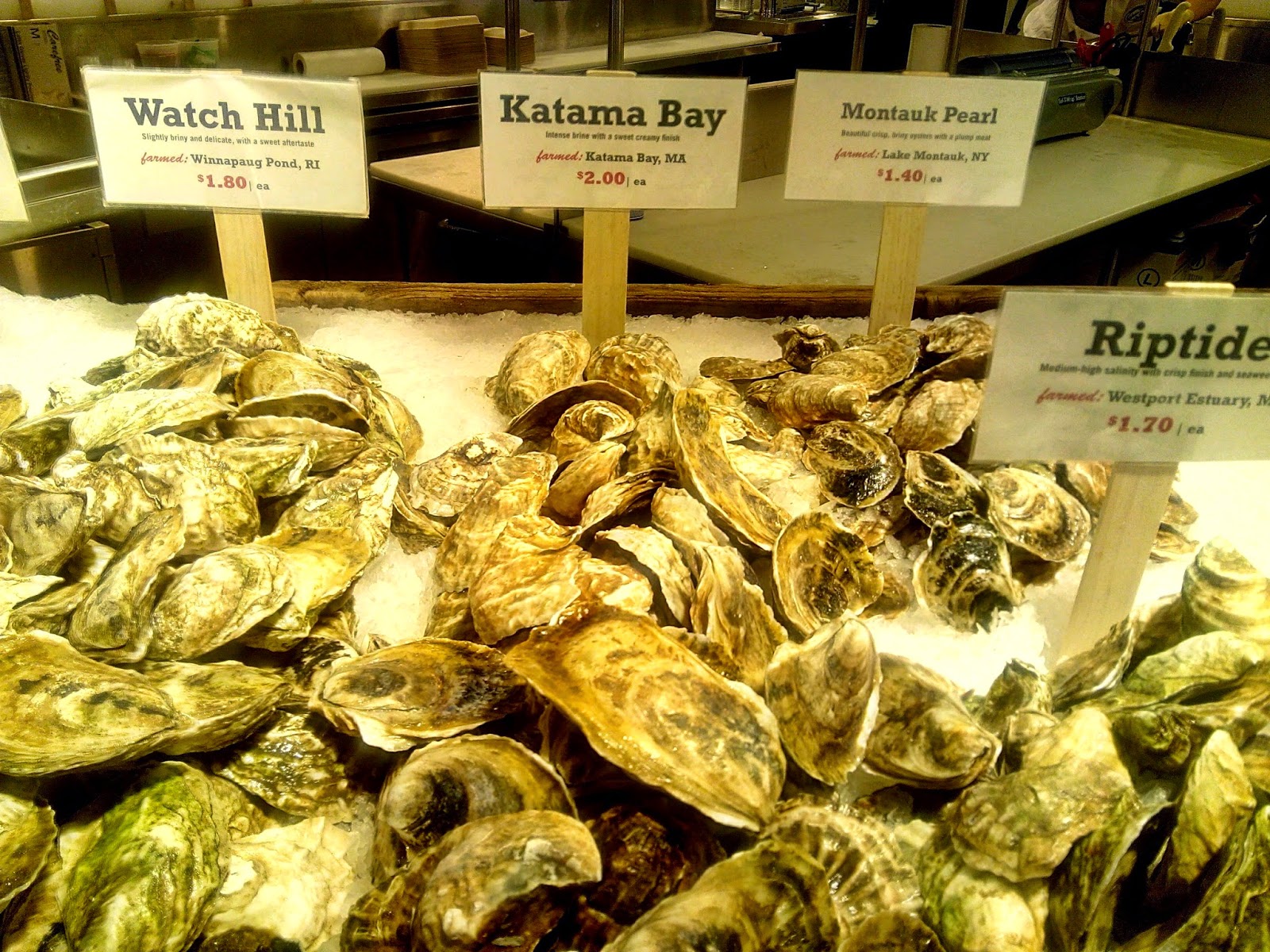 Spice stalls, a shop devoted to brownies, wonderful cafes, bakeries, fresh fish markets…there was something for everyone, and really far too much choice! We stopped in for a quick brunch, and then headed off to explore the rest of the city. 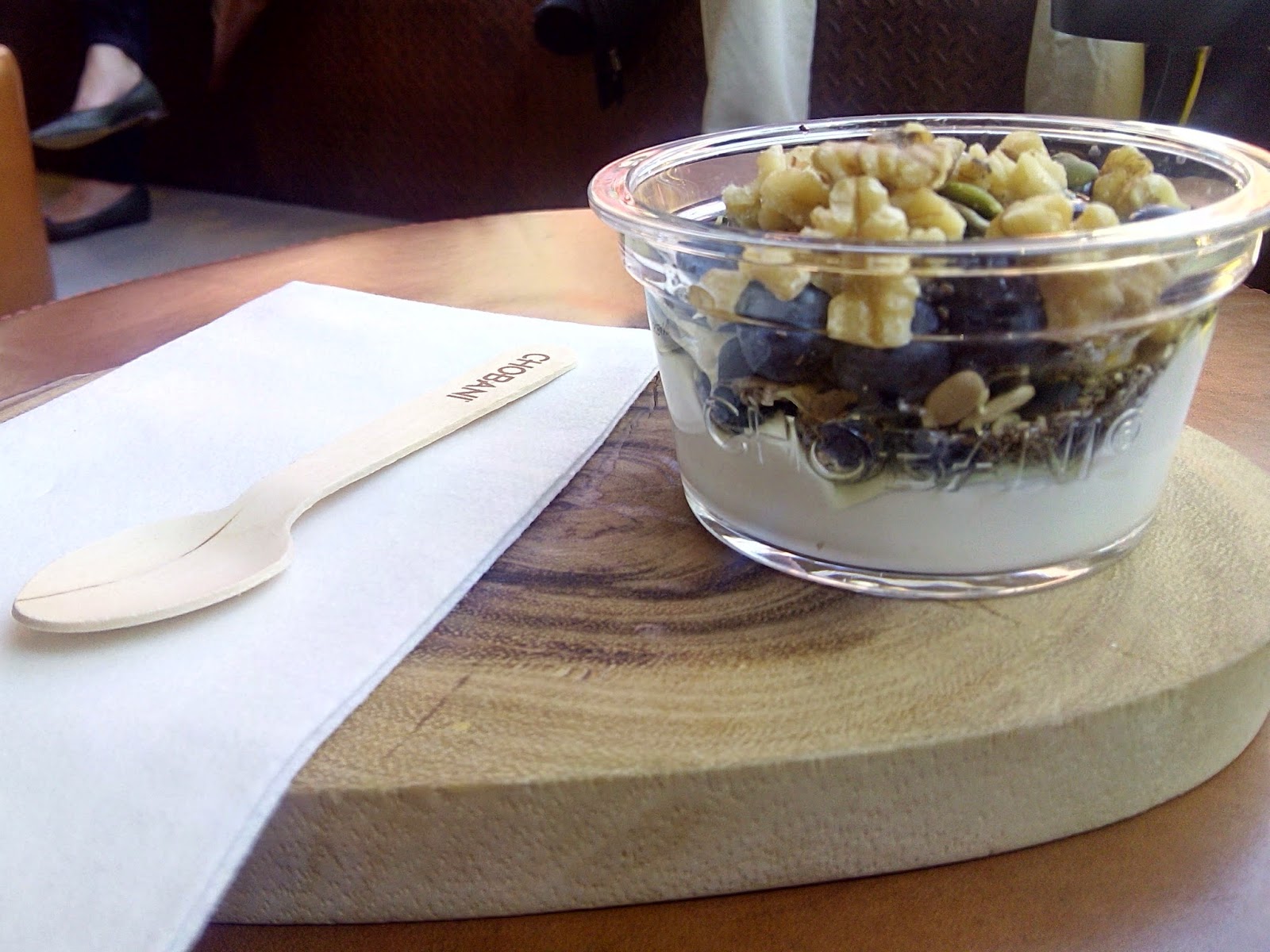 Moving away from Chelsea, we headed into the equally cool Soho. A fashion haven that houses all the major brands, high-street and designer, it is also the location of the Chobani Yogurt shop. Chobani is a Greek yogurt brand, of which I am a huge fan. Like all Greek yogurts, they’re a great source of protein and I particularly like Chobani products as they aren’t at all artificial tasting or overly sweet. In fact, all sweetness from their products is naturally occurring due to sugars from milk, fruit, honey and evaporated cane juice. They have a great company ethos in relation to locally sourced produce – so much so that the New York based company withdrew from the UK market until they could make their products within the United Kingdom. A very sad day for this Chobani enthusiast! But a great step towards avoiding air pollution – you see, what a great yogurt brand.

The shop itself is a really cool concept. Aside from yogurt it also offers sandwiches, bagels and coffee, but the yogurt is kind of the star of the show. Plain Greek yogurt comes with either savory or sweet toppings. I went for the Blueberry + Power option, which had blueberries, chia, sunflower and pumpkin seeds, walnuts and agave syrup. I was a great combination of flavors and textures, and all the toppings on the menu gave me inspiration for great snacks to be made at home. 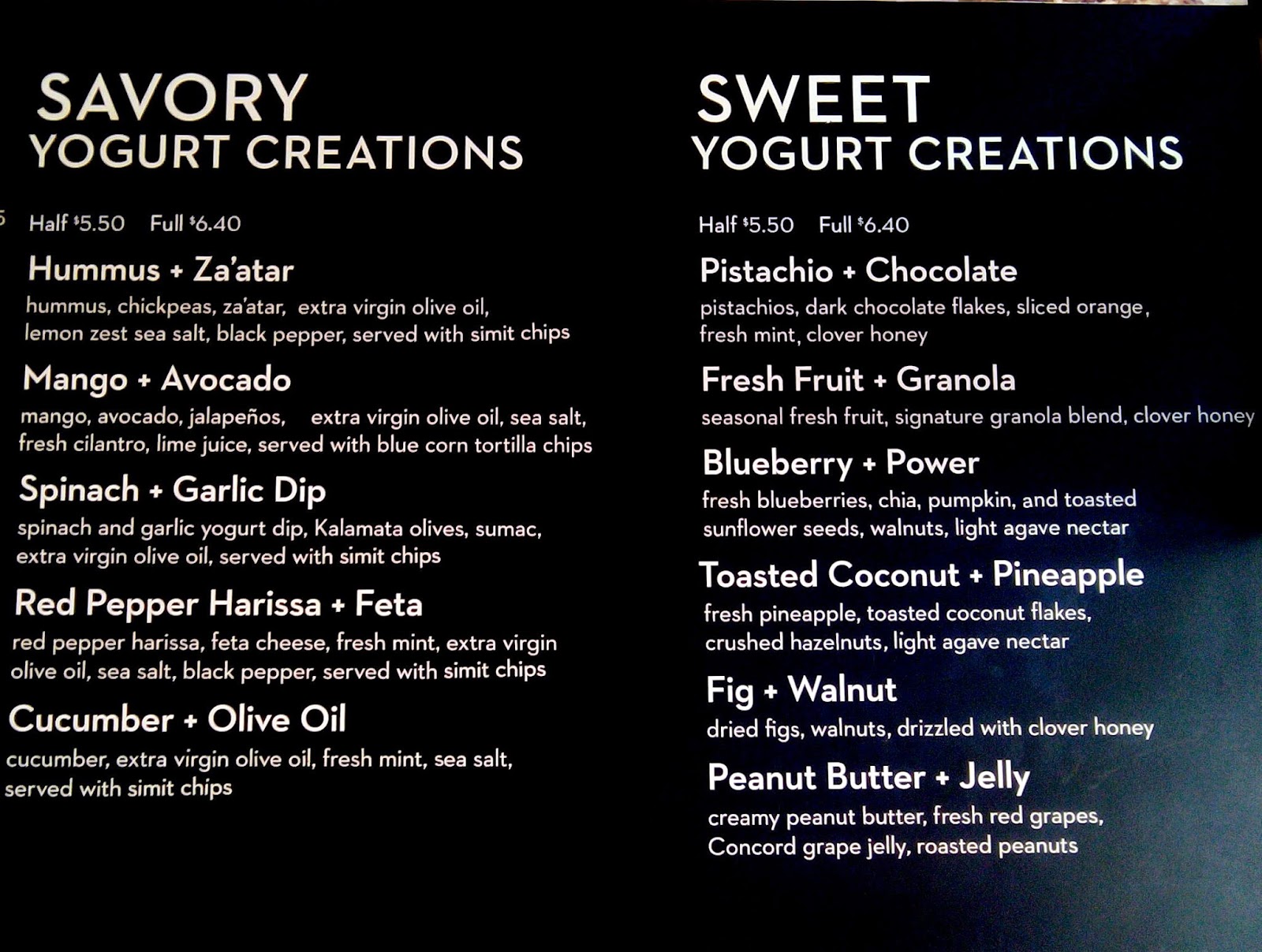 I really enjoyed strolling through Chelsea Market, and it made me think a lot of Borough market back home in London. The Chobani store was a treat for such an avid Chobani fan like myself, and I think the whole idea of a yogurt bar is awesome – clearly I’m not alone, as Chobani is the number 1 yogurt brand in all of the US!

With more of the city to see, I was still hungry. Stay tuned as we move into Brooklyn, in search of the best Trinidadian food the city has to offer.

Another day in New York and there was much more exploring to be done. On the only really sunny day of the holiday, we decided to walk around Manhattan with my Mum’s friend Jess and her daughter Emma, both who know the city like the back of their hands. Starting off in the park Washington Square, we soaked up some April rays and people-watched as many chose to lunch al fresco in the park. We, however, had our own lunch agenda, and headed off to Chinatown to Nom Wah Tea Parlour – New York city’s oldest dim sum house. 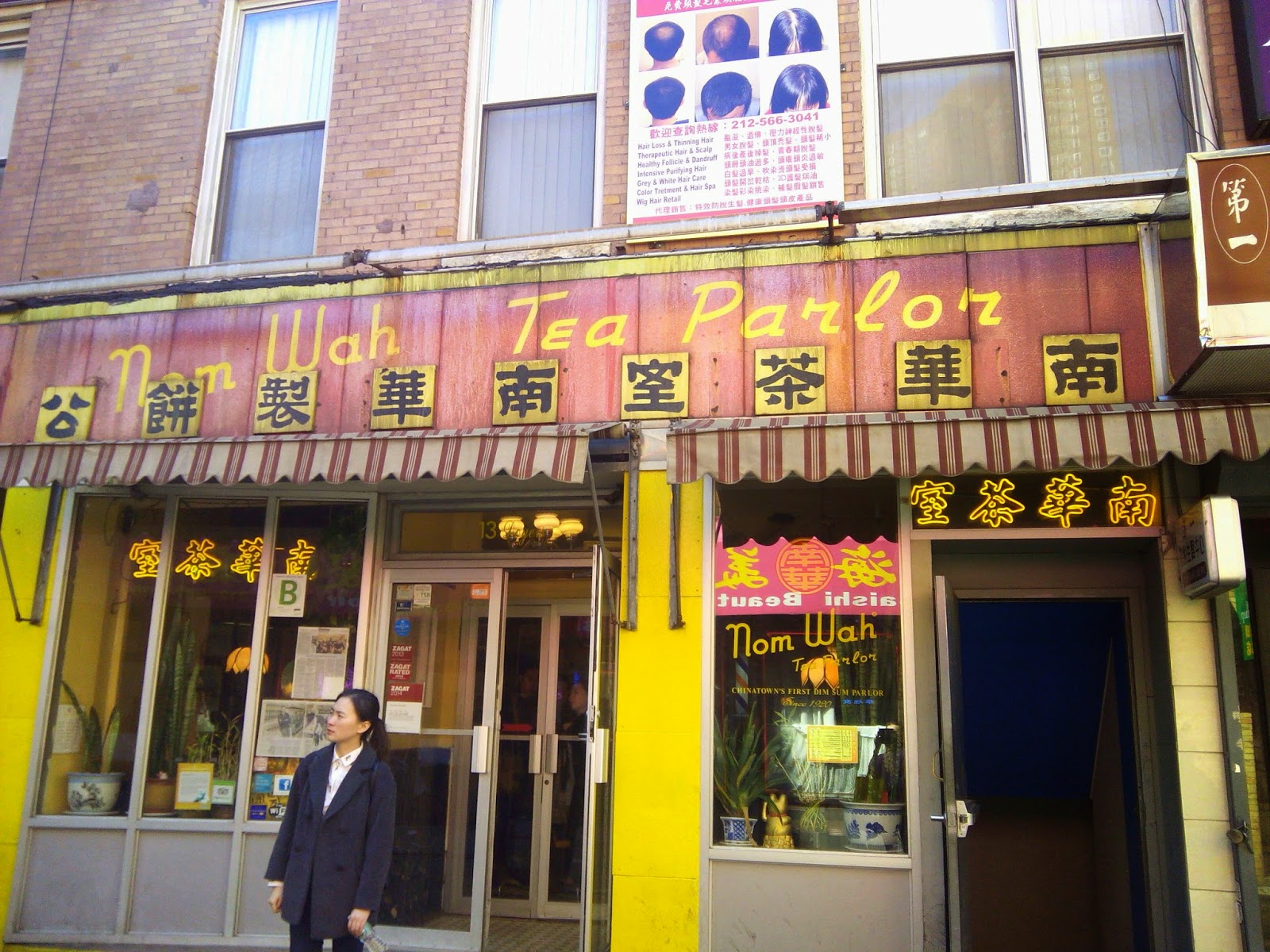 It may not look grand, but here lies the finest dim sum in all the land

Outside it doesn’t look like much, and you get the feeling it hasn’t seen much redecoration in its 95 years of existence. But that, along with the less than friendly wait staff, is all part of the charm of this Chinatown institution. Arriving hungry and excited to try as much as we could, we fired off the orders. 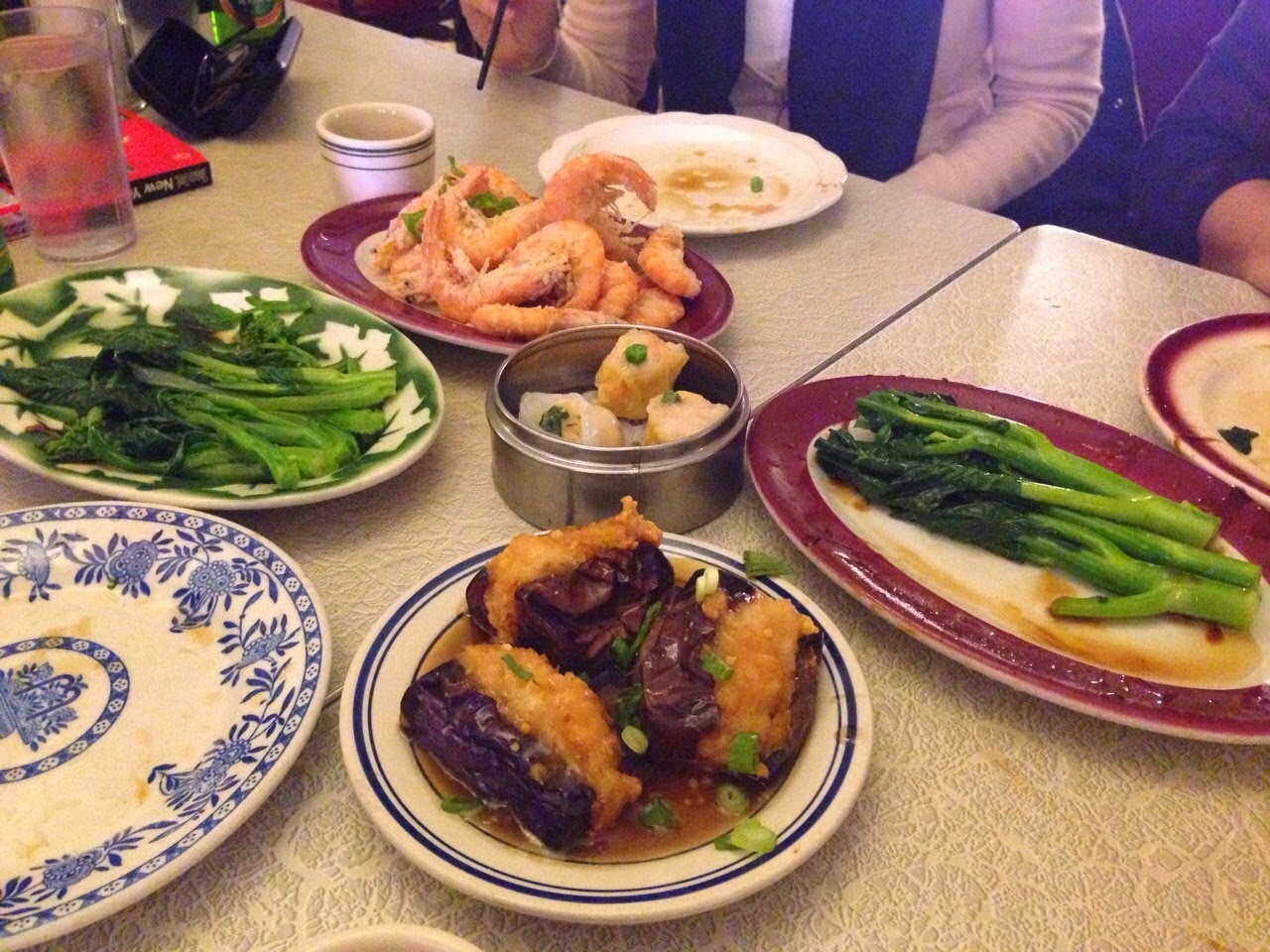 Dumplings were a must, and we opted for an array of fish, meat and veggie. The shrimp & snow pea dumplings were potentially my favorite, although they were all pretty damn tasty.  The salt and pepper squid was another stand out dish for me. And no picking off the skin or head- I ate every part and loved it. One thing I liked less were the taro balls we had ordered, but more on taro later. 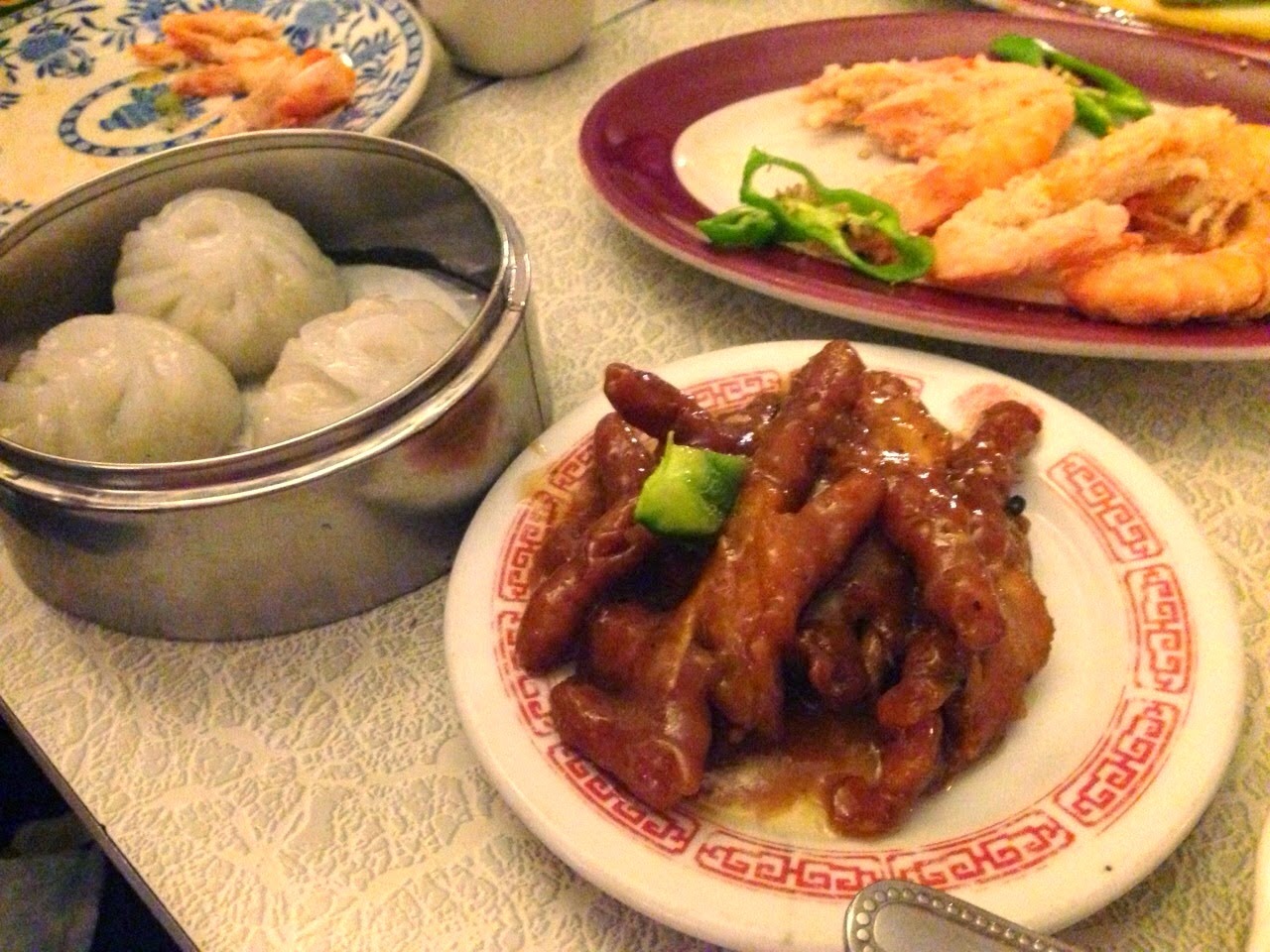 Steamed taro buns and my personal order of chicken feet

Being the offal lover I am, I ordered a portion of chicken feet for the table to share. Turned out they were just for me, as no one actually fancied giving them a go. It’s a shame, as my mum even said they smelt really good, but I think the idea of eating a chicken’s extremities isn’t for everyone. I, on the other hand, really enjoyed them – they came steamed in a black bean sauce and were delicious! 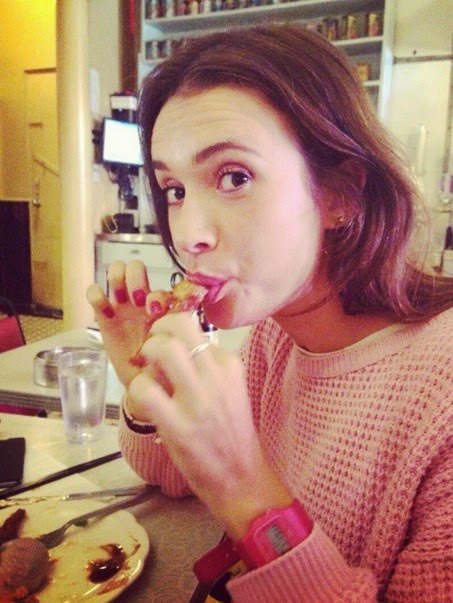 Sucking on some chicken feet

This lunch was one of my favorite meals of the trip. The restaurant had a great atmosphere, and I liked that it wasn’t in the least bit fancy or pretentious, despite how highly praised it is. In the past I’ve never been keen on Chinese food, always winding up feeling quite ill after eating it. However now I have learnt the difference between a dodgy chicken chow mein from a chippie in Leeds and an authentic, traditional dim sum meal, I’ll be sure to eat it again.

Not quite finished eating just yet, we glanced at the dessert options: fried sesame balls and some almond cookies. We passed this up, and headed to the traditional Chinese bakery Fay Da, which was recommended on one of my favorite websites, Serious Eats.
Now the thing is…I already knew I didn’t like Chinese pastries. In my humble opinion, red bean curd has never seemed like an appealing filling for cakes or pastries. I’m also not so keen on taro, the root vegetable which was in my pork dumpling at lunch, and also seems to worm its way into a lot of Chinese sweets.Therefore why I would feel enticed to buy myself a taro puff, which is just sweet taro puree in a flaky puff pastry casing, is a good question. It is also, perhaps, unsurprising that I did not like it. It’s just not a cake as I know it. I’m not quite sure what it is. Good to have tried it, but I think next time I’ll just order an extra dim sum and skip the sweet. 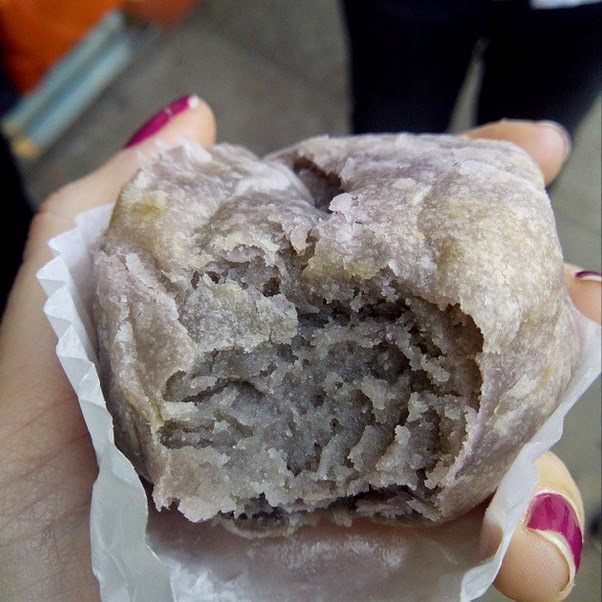 Taro puff, we will not be meeting again

Chinatown was a brilliant trip, and I highly recommend the Now Wah Tea Parlour to anyone in NYC. By no means is this the end of my Big Apple bites, so keep reading for what’s yet to come – yogurt bars and a goat curry anyone?

I just got back from the most wonderful holiday. Over the Easter break, the Bidmead girls (myself, my mum and my sister) were drawn to the city the never sleeps for a weeks stay. We explored New York to our heart’s content, visiting the many fascinating things the city has to offer, as well as catching up with my mum’s childhood friend and her two daughters who live there. It goes without saying that eating an immense amount of delicious, incredible and exciting food formed a large part of our time spent in the big apple too! 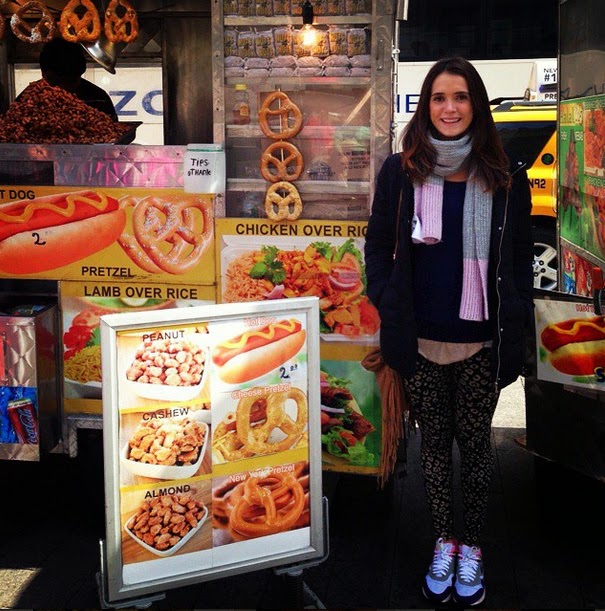 Big yellow taxi in the back, pretzels to my rights…I’ve landed in NYC!

There is no way I could squeeze all the food NY has to offer into one post (let alone my jeans. Yes, I am returning from this holiday slightly larger than I arrived – but that, my friends, is the sign of a holiday well spent). So, here is the first of a few posts on my trip to the Big Apple.

For our first night eating out in the States, we thought we’d do it in traditional, southern-style. We hit up Miss Maude’s Spoonbread Too in Harlem, which serves American soul food. Think fried chicken, mac ‘n’ cheese, cornbread, candied yams… it’s hardly healthy, but then who on earth goes on holiday to eat healthy food? 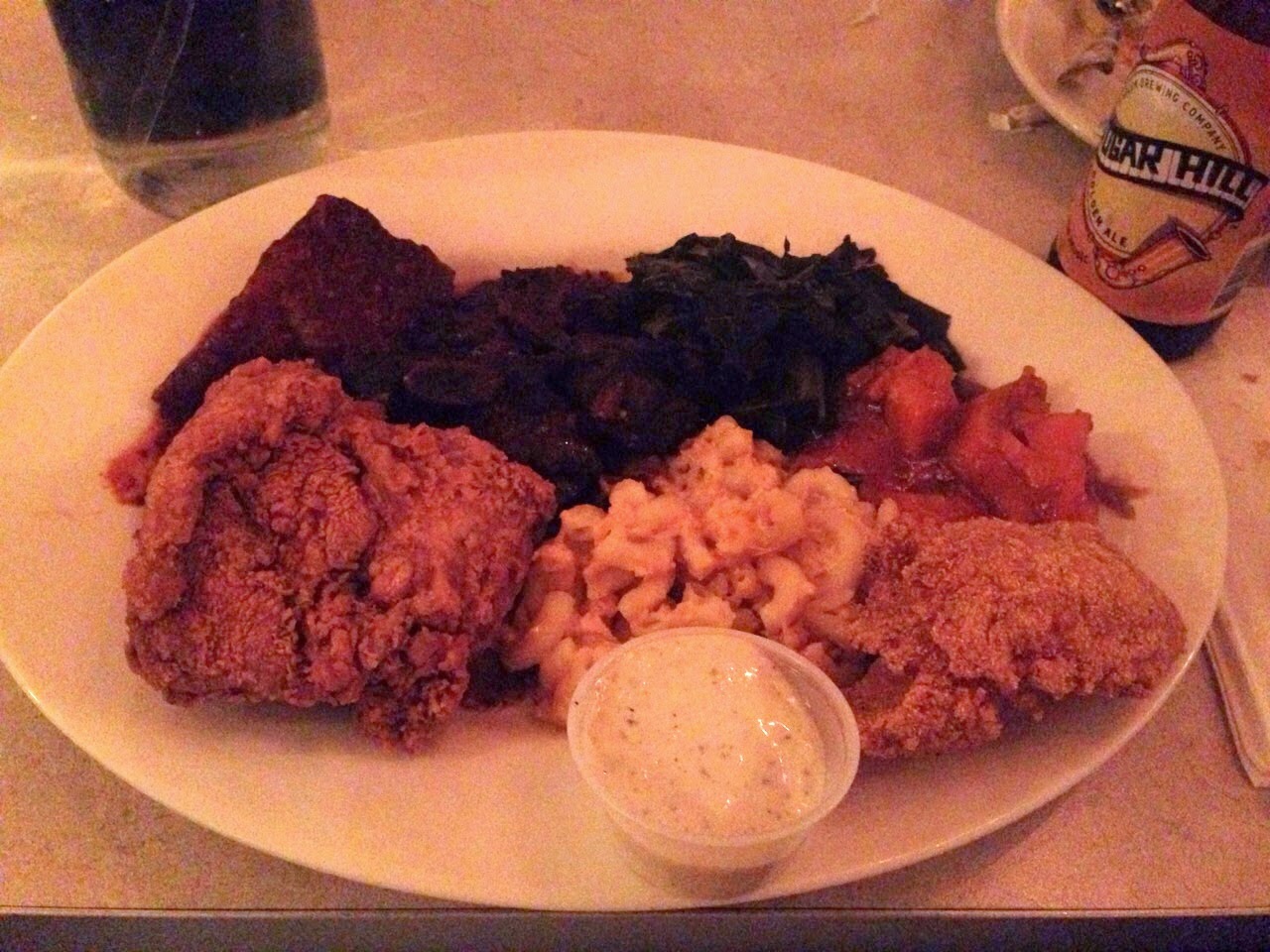 The Sampler- fried chicken, ribs, mac and cheese, collard greens, candied yams, fried shrimp and tartar sauce. I apologise for the bad quality photos! I aim to improve them with a better camera in time.

I went for the Miss Maude’s Sampler, described as “A smorgasbord of Southern delights, including shrimp, ribs, chicken and vegetables”. It came with collard greens (basically cooked chard), candied yams and mac and cheese. I loved the sweet, cinnamon-y yams with the rich, dark meat, and really enjoyed being able to sample a little bit of each classic dish. 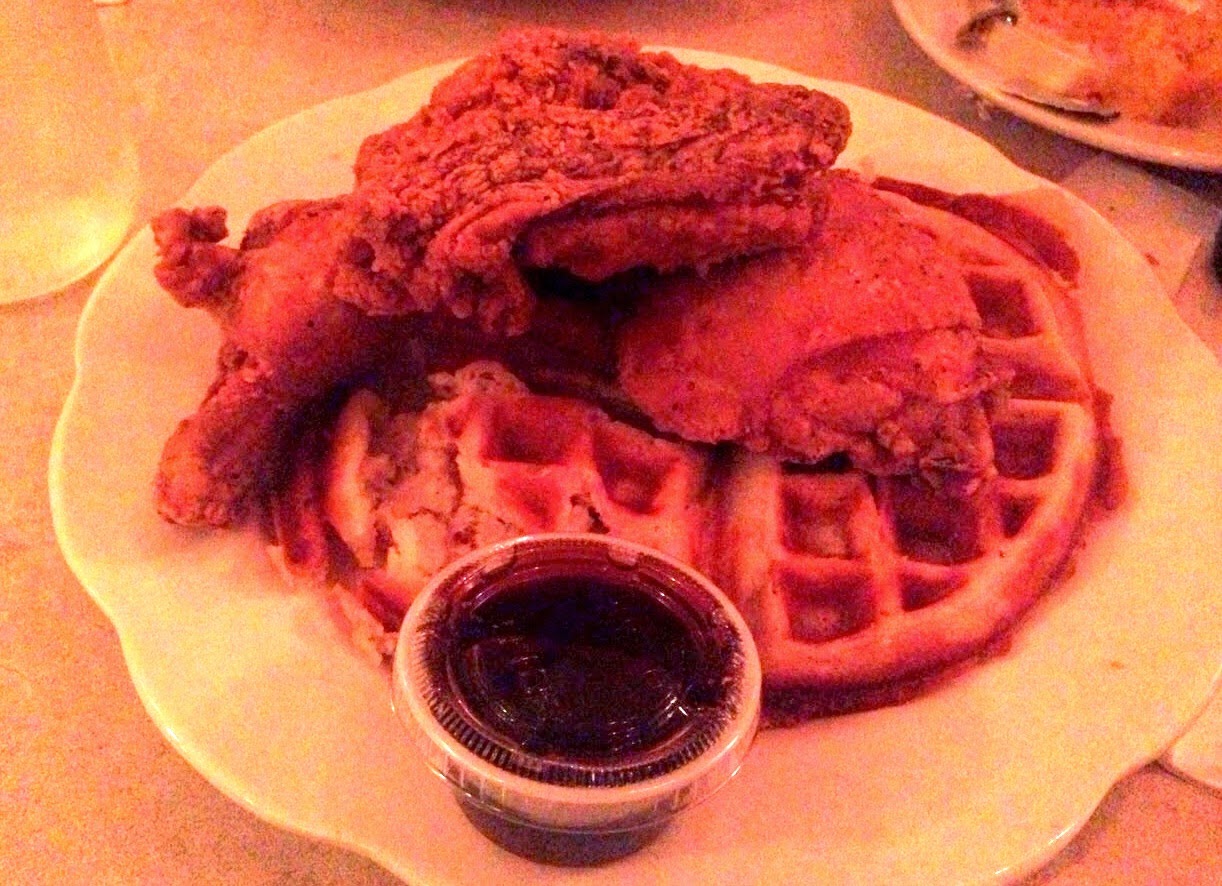 I was pleased when our friend Emma ordered the Chicken and Waffles as I’d always wanted to try this, but feared it might not be actually something I really liked. And it turns out I was right. Waffles? Yes. Fried chicken? Absabloodylutely. Put together? Not so much. Next time I’ll stick to chicken for my main and waffles for my dessert.

Do you know what smothered chicken is? Perhaps you’d guess it’s chicken covered in some kind of sauce. Well…make that sauce gravy, and try deep frying that chicken first. I didn’t get any of this in my sampler platter, but my mum’s friend Jess ordered a plate, meaning I got to try it. 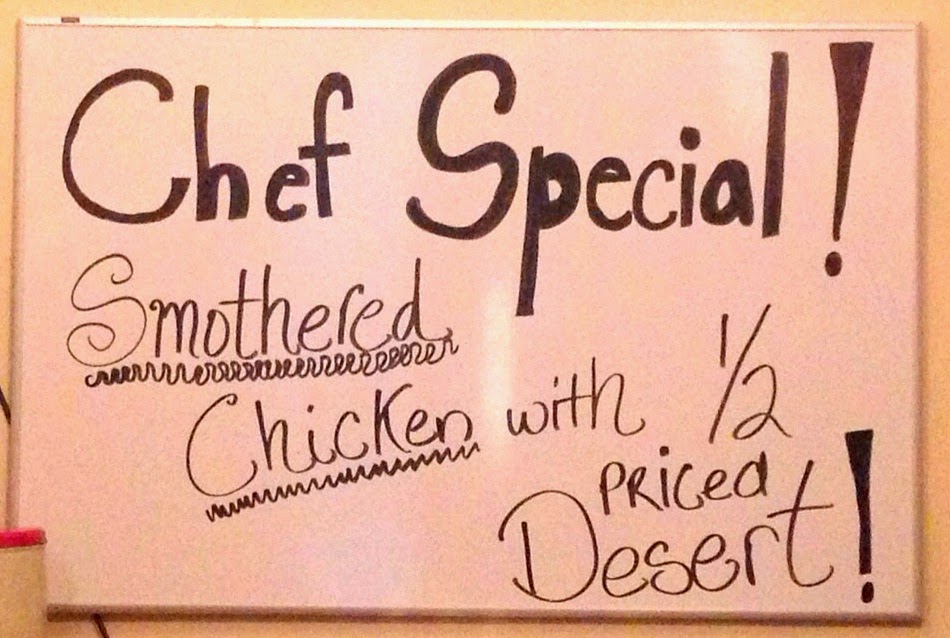 In case these mammoth portions aren’t filling you up…try a half price dessert on top of your smothered chicken!

Think of all the flavor of fried chicken, with it’s soft tender meat and addictively crispy skin, topped off with spoonfuls of salty, meaty gravy – quite the combination.

You may be surprised (and impressed) to learn we even managed dessert. We shared a peach cobbler, which is some kind of mix between a pie and a crumble, and a slice of red velvet cake. Both were exceptionally good and I particularly liked the cobbler, with its sweet stewed fruit on the bottom and cakey-buttery crust on top. I always argue that even if you are full from your main, desert is a whole different compartment of the stomach waiting to be fed. It would appear my dinner companions agreed, as we managed to finish both the deserts! 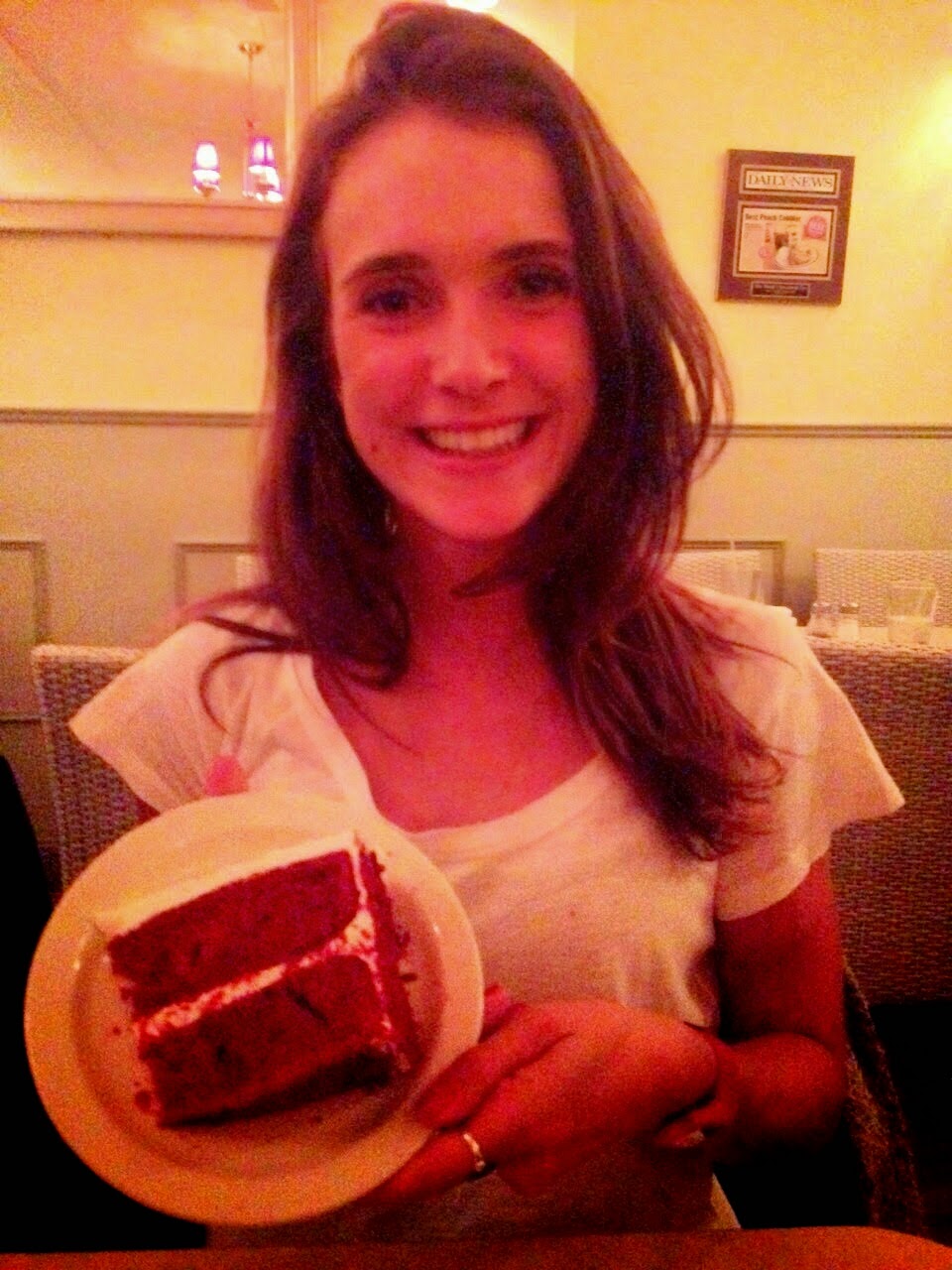 Red velvet slice, approximately 2/3rds the size of my head.

This meal was a hit with everybody, and also very good value considering all the food we managed to consume. I could only imagine what other foodie delights were in store…this truly was only the beginning! Stay posted for some classic New York deli food, dim sum at Chinatown’s oldest restaurant, food markets and Trinidadian food in Brooklyn, and a very non-traditional Passover dinner.