Unbelievably, nearly a year has gone by since I arrived in Colombia to work as an English Language assistant. In a bid to see as much of this wonderful country as I can before I head back to blighty, I headed off travelling again, starting in the capital of Colombia’s Amazon, Leticia. An impressive 800km away from the nearest highway, Leticia is unlike any other part of the country I have visited so far and its borders with both Peru and Brasil make for a real melting pot of cultures. Coming in on the plane from Bogota, all that can be seen for hundreds of miles is thick, dense jungle forest. 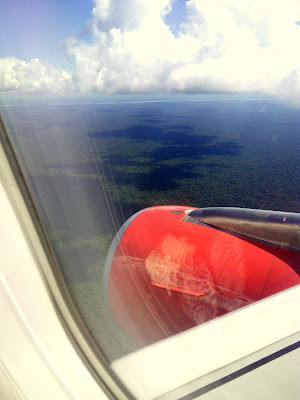 Welcome to the jungle!

Travelling alone, I reached the hostel I had reserved and got chatting with two girls in my dorm, both from the UK. It was around lunchtime and our tummies were rumbling, so we headed off in search of some grub. Leticia holds many exciting culinary options, but perhaps the most exciting is the fact you can nip into Peru for some fresh ceviche, or head on over to Brasil for their typical brasilero barbecue. Feeling like something fresh, we jumped in a boat over to Peru, heading for what is known to be the best ceviche in town. 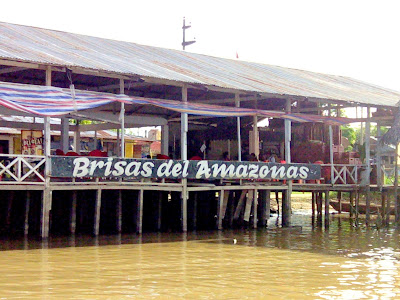 Why not arrive to all your lunches via boat?

Pulling up to Brisas del Amazonas, the Peruvian music, signs welcoming us to Peru, along with piles of fresh ceviche made it clear we had reached the right place. 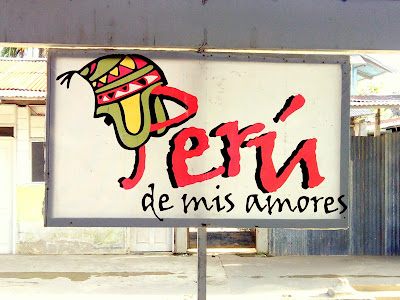 We ordered the mixed ceviche to share, and it was incredible.

It came with mussels, prawns, langostines, fresh crab, white fish (which I must confess I do not know the name of), yucca, sweet potato and delicious salty toasted corn. This between three was perfect, and cost a grand total of eight pounds. Luxury meal, budget price = happy lunch out in Peru.

Always one to try a local delicacy no matter how weird it may be, Leticia presented me with a first – crunchy, salty, insects. Known as mojojoy, these little bugs were actually pretty tasty. Filled with cheese and served alongside farinha (tasty ground up dried yucca with a nutty flavor), these went down a treat. 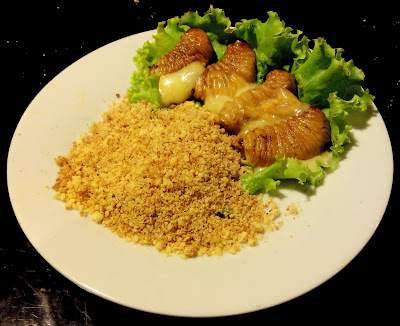 During my stay in the Amazons, I opted for a two-day jungle tour. Alongside 9 other travelers I trekked into the jungle, staying a night in a maloca (the home of an indigenous tribe) and one night under a cambuche (a makeshift shelther) in the middle of the jungle. A physically demanding couple of days, it was well worth the torrential rain, tropical heat and hours of walking – if not just for the food alone! This was no mediocre campside comida – we had some fine meals, featuring whole roasted chickens and enormous fish dinners. 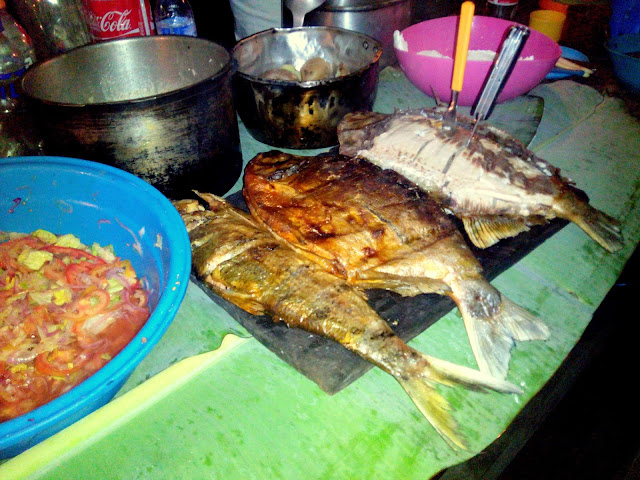 I did not imagine the food to be nearly as good as it was and we were all delighted! The meal above features two typical fishes found in the Amazon – the larger two are gamitana, which had a meatier flesh akin to tuna, while the slimmer fish is tucanaré, which was more similar to cod. This all came served with boiled potatoes, rice, salad and a typical cassava pancake with an almost rubber-like texture. While the pancake itself was quite bland, eaten with the fish and salad it was a perfect accompaniment.

Back from the jungle it was nearly time to leave lovely Leticia, but not before I hopped on over to Brasil. Leticica borders Tabatinga, which is part of Brasil. As a town itself Tabitinga hasn’t got very much to offer, other than very cheap cachaça and the well-known restaurant Tres Fronteras, which as the name suggests, offers food from each bordering country. 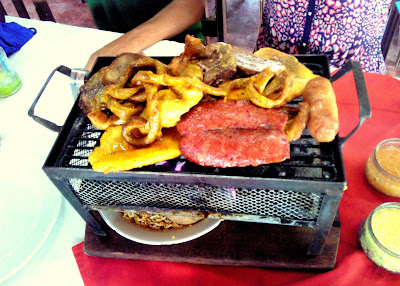 No veggie option for us

I was fortunately in the company of some very like minded carnivores and we went for the mixed parillada (meat grill). Supposedly feeding two people, this came with chorizo, tripe, chicken breast and thigh, flank steak, tongue and probably about a million other meats I’ve forgotten to mention. As a side, you get a whole plate of arroz chaufa (Chinese style rice) and boiled potatoes. I sincerely want to meet the couple that defeat this alone…between three we still couldn’t finish it! 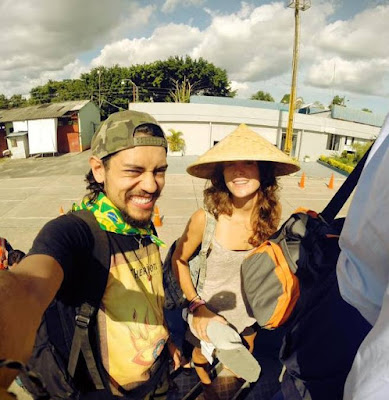 As the meat coma wore off it was time to head out of the jungle and back on the road. Stay tuned for some more travel BidmeadBites, involving some crab in Cartagena and some ‘dangerous stew’ in Cali…

« Desert Dining
Note to self – do not eat endangered animals »